Anecdotal evidence suggests that there are certain generalizations that work well for most footwear such as matching severe overpronators and heavier individuals with motion control shoes or light, efficient individuals with neutral shoes.  But according to the biomechanics research, humans do not respond in a systematic way to footwear features and since gait patterns are highly unique, it is not always possible to predict how someone will interact with a given shoe.  So instead of recommending shoes, the AAPSM advises that individuals become familiar with the structural features that work well for them and then seek out those features when replacing shoes.  The process of discovering what structural features work for you can be one of trial and error.

Some running publication websites and footwear retailing sites review and award running shoes.  The majority of websites offering reviews and awards have a financial relationship with the footwear industry and advocate unreliable forms of self assessment (such as wet paper towel tests, rating one’s own ability to pronate, and shoe wear patterns).

Outsole – The bottom of the shoe, usually made of carbon rubber or blown rubber.

Upper – The fabric or leather part of the shoe that secures it to the foot.  The upper is either sewn or glued to the midsole.

Midsole-  The midsole is sandwiched between the upper and the outsole.  Most running shoe midsoles are comprised of a closed cell foam called ethyl vinyl acetate (EVA). A few shoes use polyurethane for the midsole.   The cushioning and stability devices are embedded within or attached to the midsole.  This midsole is the most important part of the shoe in terms of cushioning and stability. 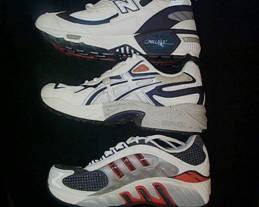 A medial post is a device within the midsole that is firmer than the remainder of the midsole. Medial posts are usually made of EVA which is denser than the rest of the midsole.  This is known as a dual density midsole. Medial posts may also made be made of thermoplastic urathane, carbon fiber or other materials.  The size and the shape of the posting device along with the density of the material used determine how much stability it provides. By stabilizing the midsole under the medial rearfoot and arch pronation may be controlled.  Medial posts are found in all stability and motion control shoes but are not found in cushioned or neutral shoes.

Benefits of: decreases some of the inherent instability of cushioned midsole foam, assists in controlling excessive pronation

Consequences of: adds weight to shoe 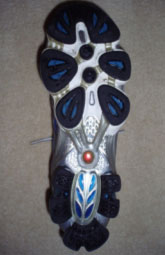 A shank stiffens the shoe under the arch which makes the middle portion of the shoe more resistant to torsion and flexion.    Most running shoes except the lightest and most flexible, incorporate a shank.  Some shoes wrap the shank up the medial (or arch side) of the shoe so that it functions also as a medial post.

Benefits: Assists the shoe in bending at the toes instead of under the arch, as the foot does when the heel lifts and weight transfers to the forefoot in gait.

A last is the foot model over which a shoe is constructed but the term is used in two different ways when describing a finished shoe; one to describe the shape of the shoe and the other to describe the manner in which the upper is attached to the midsole.

Last Shape: Refers to the shape of the shoe.  Last can be curved, semi-curved, or straight.  The significance of the last shape is that curve lasted shoes tend to be lighter and less supportive while Straight-lasted shoes are heavier and provide more support under the arch.  Semi-curved are a hybrid of the two others – not quite as heavy or as a straight lasted shoe yet still capable of providing support under the arch.

Semi-curved lasts are a hybrid of the two - more stable than curved but less bulky than straight.  The majority of running shoes are made with semi-curved last. 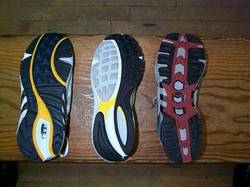 Last construction: This refers to the manner in which the upper is attached to the midsole.  The significance of last construction is that the type of last influences the stiffness and flexibility of the shoe.

Board Lasted:  Board lasted shoes have a firm board that provides a rigid platform for the foot.  Boards are often made of plastic or cardboard. Board lasted shoes are the most stable but are less common in today’s running shoes.

Slip Lasted: Slip lasted shoes simply wrap the fabric from the upper under the foot without using any type of board.  You can recognize a slip lasted shoe by removing the insole and looking for a seam down the middle of the footbed. Slip lasted shoes are the most flexible.

The Relevance of Structural Features of the Running Shoe 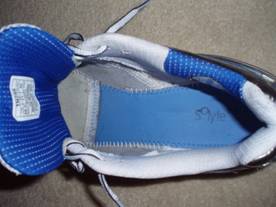 Strobel lasted shoe with stitching
around edge of footbed

So how do the sum of the running shoe parts add up and what do they mean when put together?  The midsole cushioning, stability devices, last, and even the fit all add up to determine the how much stability the shoe provides.  The most stable shoes generally use the largest, densest medial posts and straightest lasts which means they control pronation better than neutral shoes but are much heavier, stiffer and tend to feel clunky to the majority of runners.   Neutral shoes generally have no medial post and curved lasts which means they do not control pronation and are lighter and more flexible than motion control shoes.  Moderate stability shoes then are a hybrid of motion control and neutral.  Less stiff and heavy than motion control yet more stable than neutral shoes.  The majority of running shoes sold are stability shoes because most runners benefit from shoes that are neither too firm and stiff nor too cushioned and flexible.