"SLIDE or STRIDE : A Hole in My Shoe"

This tennis playing podiatrist logged many hours on the court during the summer of 2009. Playing in mid-atlantic, national and international competition, my feet took a beating. Recently, I happened to feel a "breeze" on the bottom of my right shoe and noticed a large hole (Figure 1). Although, this self-inflicted "air conditioning system" might be helpful on those hot and humid summer days, it is NOT recommended for any tennis player. Nonetheless, this hole in my sole offered me "food for thought". 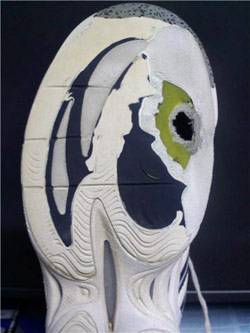 Over the last several years, I have noticed more and more professional tennis players sliding on hard courts (in addition to the common practice of sliding on clay courts). Maybe, as I yearn to elevate my game, this has been my missing ingredient to greater success. Having been raised on the public hard courts of Terre Haute, Indiana, I must admit that I was never instructed on the proper technique of sliding on a tennis court. But, perhaps, the first step in mastering this technique is to purchase a new pair of shoes that will assist me in sliding. As Spike Lee/"Mars Blackmon" said in 1989 on the famous Michael Jordan commercials, "... It's gotta be the shoes, money ...". Therefore, as a reasonably well-informed consumer, I began my search.

In purchasing a tennis shoe, the portion of the shoe that most directly affects one's ability to slide or not to slide is the outer sole of the shoe (Figure 2). And, there are several features that need to be considered. First of all, the tread on the sole that is most necessary for sliding is the characteristic herringbone pattern. These shoes can be utilized on clay because this pattern allows for sliding with the necessary traction. For players that desire to play on hard courts, a modified herringbone pattern is utilized. A second important factor to consider is the density of the rubber that is used on the outersole. That is , a shoe with a harder density rubber should be used on a hard court. On the other hand, playing on a clay court would be better in a shoe with a less dense rubber.

From my perspective, if Andy Roddick, Novak Djokovic, Rafael Nadal, James Blake, Kim Clijsters, etc. can slide on a hard court, why can't Dr. Alex Kor (or any mid-atlantic tennis player) emulate today's stars ? If one examines this list of "today's best hard court sliders" on tour and the brand of shoe that they use; it is interesting to note that there does not seem to be one brand name that is superior.Therefore, it comes as no surprise that there is NOT a significant difference in philosophies among a few of the shoe companies that I contacted with regard to sliding. Terry Gibson, assistant Marketing Manager for Wilson Sporting Goods, states that the Wilson tennis shoes use a directional herringbone pattern in combination with a high density, extremely durable rubber compound (Duralast Supreme) for abrasion resistance on hard courts. Nike does not make a shoe specifically for sliding on a hard court, because "the outsole would wear out more quickly." Monte Long (the Mid-Atlantic sales representative from Babolat) tells me that Babolat has introduced the Optimized Cell System (OCS) which includes small circles which open up when the shoe is placed in a lateral position which creates more traction. In addition, he also explained that a sole with a harder rubber will slide better on a firm , smooth hard surface, wheras a softer material will grip better , but not last as long.

Thus, as you can see my "shopping trip" was NOT so straight-forward. Maybe, Spike Lee/"Mars Blackmon" was wrong in 1989, and I need to improve my technique. There is no doubt that the practice of sliding on a clay court is well established, and somewhat innate for players who are raised on the "kitty litter". That is , according to Baltimore teaching pro and former ATP touring pro, Steve Krulevitz, "...Sliding on clay is an art. And yet, it must be practiced. Fellow pros on the tour especially from Australia and New Zealand used to practice doing sliding drills ..." Maybe, I need to begin these drills, now. In my zest to improve, I requested input from Jack Schore, a Washington, DC based tennis pro who coached Dan Goldie and Richie Reneberg. Jack Schore told me, "When sliding on clay, your objective is to slide into the shot. Some players think that you slide after the shot, but this is incorrect." Phil Flanagan, A USPTA Teaching Pro in Boca Raton, Florida adds that "... Sliding after the contact point creates a more difficult recovery because of the extra time and distance the player is moving away from the center of the court. On the other hand, when properly executed, Flanagan states that," At the contact point, the player has a solid base from which to power up and through the ball. After contact, the player is able to push off to recover before the next shot." 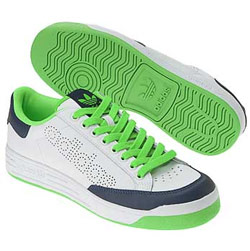 According to data from "From Breakpoint to Advantage", by Dr. Babette Pluim and Dr. Marc Safran, it is clear that sliding on a clay court results in less wear n' tear on the body vs. the same activity on a hard court. Thus, it comes as no surprise to me that Jack Schore does not advocate sliding on a hard court. Jack says "The court does not give like clay and there is a chance of your ankle twisting each time you attempt a slide." Thus, as a podiatrist, I would caution the recreational or novice player who desires to begin sliding on a hard court for fear that he/ she may sustain an acute ankle sprain, ankle or foot fracture, blisters, and overuse conditions.

Phil Flanagan agrees with Jack in not suggesting his students to slide on a hard court. But, he adds that "The hard court sliding that you see on television is being performed by world class athletes who posses the physical skills and strength that allow them to slide. The physical demands of the professional game sometimes requires the player while running wide to slide. However, you will also notice that the hard court slide usually occurs after the contact point."

A tennis player's ability to slide on a court can be affected by age, athletic ability, flexibility, weight, court surface and the outer sole of the shoe. In reviewing these expert opinions that I have gathered, I have concluded that I may be doing more harm in trying to slide on a hard court. Therefore, like many Mid-Atlantic tennis players, I may simply need to play more and practice harder. Perhaps, Bruce Lipka, Director of Tennis at the Woodmont Country Club sums it best by saying "... the only thing affecting your ability to slide is your ability to slide ...".  Well, I have been known to do the "electric slide", but I may want to restrict this to the dance floor.

Back to Articles & Resources Main Page